There are very many superbly artistic photographers out there

I don't count myself amongst them

Like Castel Coch in Tongwynlais near Cardiff where I live 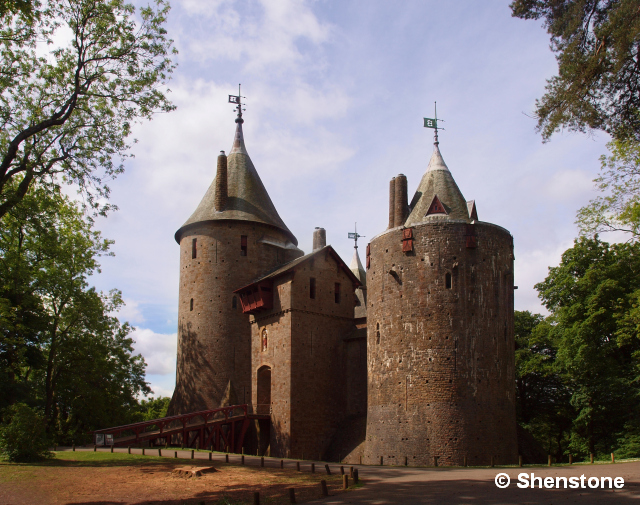 It's a place I know well. it should be... I got married there

Thankfully this has now been rectified in part, but it;s also left me realising that I need to do more. I had a walk I was leading in the area so rushed off to check the paths were OK before the day and realised I was there, the light was nice and I had seconds with one lens and a few seconds before a hoard of people walked into the shot

So here's my chocolate box view of Castel Coch and I think I could see it adorning many a suitable box of local delights..

Now I just need to sell the idea to someone :-)
Posted by Shenstone at 10:38 PM No comments: Links to this post

What you can get away with

However as I was also organizer, part event leader, rounder upper of people and general dogsbody as well I found the whole timing aspect quite a challenge

Take these for instance 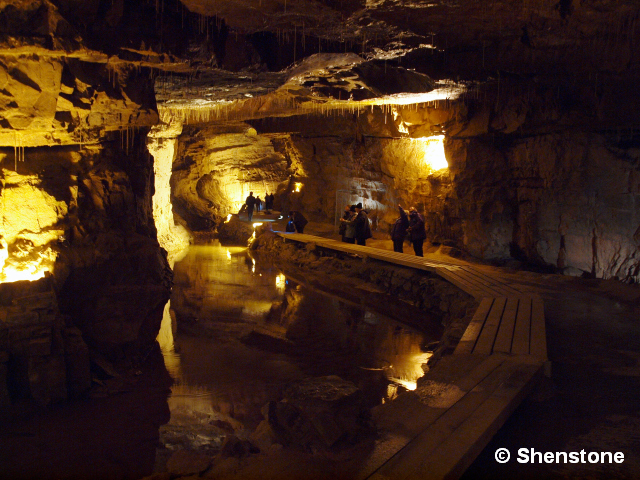 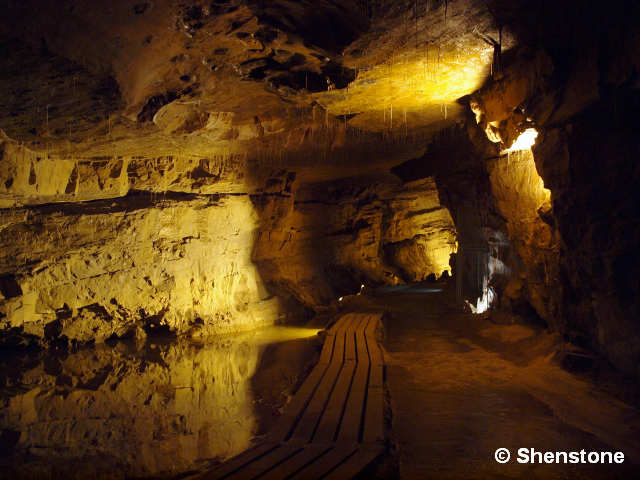 These are both taken on the E-30 with the 14-54 lens and they are taken hand held, no tripod, and using the show cave lighting which was only on for a short period of time as we went through ( the caves were not open yet for the season). ISO 800 and F2.8

OK I'm not going to win any competitions with them and they are to be honest not pin sharp when you look at them full sized on a good screen, but a few years ago I would not have considered taking such pictures. Even when I stated with the e-Series my E-500 was not up to these type of pictures and I would have had to do noise reduction, but these are straight out of the camera, resized and posted.

As I say - an example of what you can get away with
Posted by Shenstone at 10:37 PM No comments: Links to this post

My Tree in Spring

I can't keep away .. it keeps calling and last night I caught it with the dun in the perfect position for some sunset silhouette pictures

Take this for example

Stand in such a position that the sun is behind the tree.. it makes a nice silhouette and puts a glow around the tree. 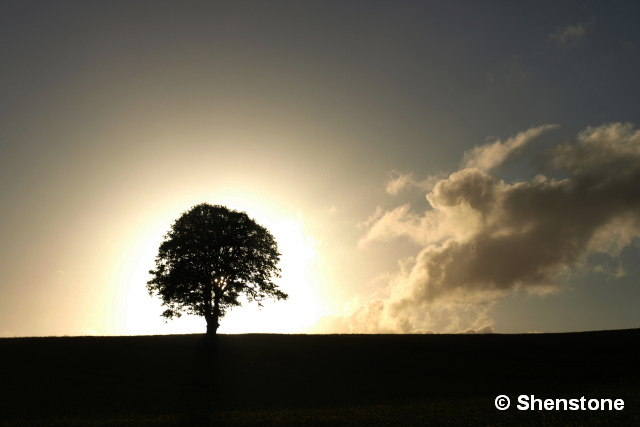 OK so maybe that's too much cloud in the picture ...

Stand still for another 2 minutes 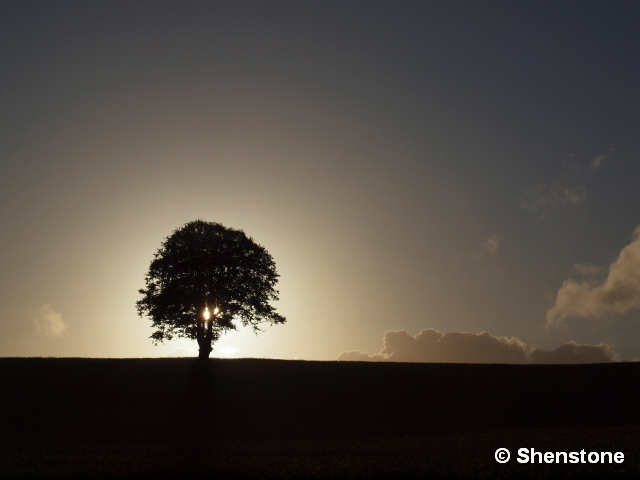 Well that may be a bit too much tree for some... 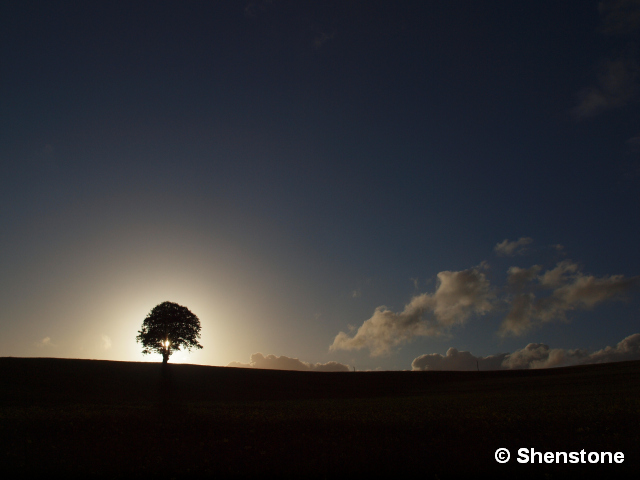 Some people have wonderful artistic vision and can see the unusual in any scene. I'm not one of them, but I think I can appreciate a nice view when I see one and if no-one else likes them at least I can say that I enjoyed the 20 minutes I spent standing in the sunshine appreciating the beauty of the skies
Posted by Shenstone at 10:38 PM No comments: Links to this post

A While ago I posted one of my personal favorite imaged I took last year down on the banks of the River Severn at Goldcliff, near Newport South Wales 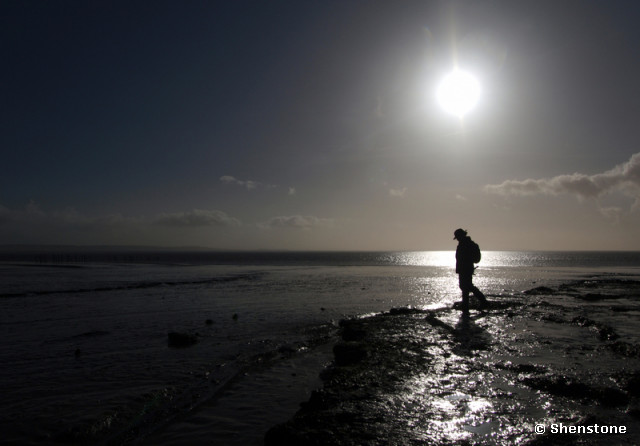 It's never that clear to me what I should think of as banks of the River Severn. Clearly when you can see right across to the English side it's still a river, but it's also tidal and therefore an estuary rather than strictly being a river.

Recently I see a lot of definitions stating that the River ends at the Second Severn Crossing Bridge, but it must have had a start and end before that bridge was built.

The next section is called the Severn Estuary which take us The Severn Estuary is said to extend to a line from Lavernock Point (south of Cardiff) to Sand Point near Weston-super-Mare. so I think I can still call those pictures Severnside (which is a good job as the one above is taken in that section. 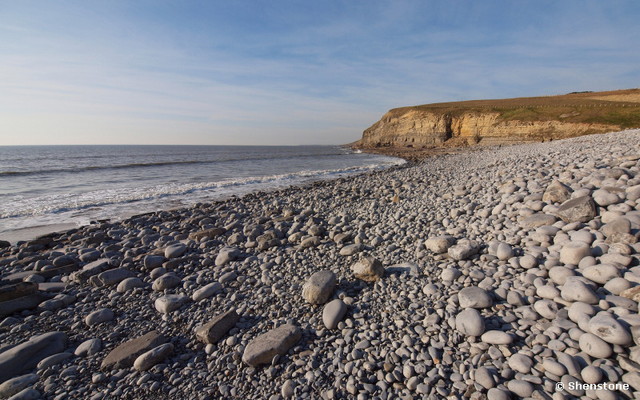 Luckily the old name for the Bristol Channel was the Severn Sea and in welsh it is still named: Môr Hafren, meaning 'Severn Sea' so I think it's quite reasonable for me to put those in the Severnside section as well when I get a minute

As to Pictures of Tenby, well these are also contained within the strict definition of the Severn Sea as I will call it, but for me these deserve a section all of their own
Posted by Shenstone at 8:14 PM No comments: Links to this post