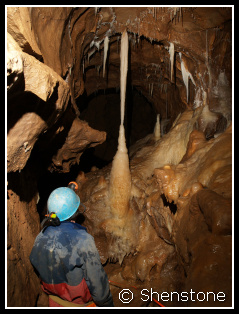 Caves are the absence of rock, sometimes being filled back in again which is what makes the stunning formations.
I tried caving in the scouts in the 1970's and took it up seriously at university in the early 1980's, when I was lucky enough to be at a university that had it's own caving club cottage in the Yorkshire dales, and who also had excellent contacts in the Derbyshire caving area. After that I moved south and was a founder member of the Morgannwg caving club in Cardiff when I moved there in 1984 and met some local residents who went on to be be our closest friends and are now publishers of many fine caving publications including descent magazine  Having moved to wales I was lucky enough to be invited on a days caving to take pictures in Dinas Silica Mines which is where I met the girl who was later to be my wife.

With her interest in caving art we've become very active in the ISSA  group and that has led to us getting to know the Mendip caving scene a lot better and we've seen some fabulous places over there as well.
I started with a sporting interest, it was the challenge of doing something that scared me when I was young and then it grew into a passion and a fascination and something that went on to shape my life and has given me some of my best friendships, and I even met my wife underground 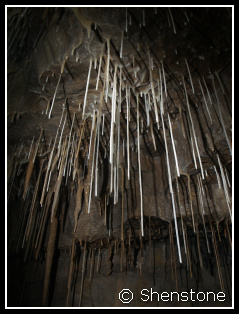 I've been at times a reasonably fit and active caver, but the days of enjoying 12 hour trips where most of it sitting around waiting for someone else to some up or down a rope have long gone and I now am much more interested in the understanding the science of caves and the delights that I give in showing pictures of them
Caves are mostly in limestone and created by water, but cavers such as myself do also like exploring the other types of underground sites such as Lava tubes created by volcanoes and mines created by Man. I've so far managed to visit caves, mines and lava tubes in the US, Australia, Iceland, France, Spain, Canary Islands, Italy and all countries of the UK so I've a lot more to look at yet.
Over on my website I have a number of Caving & Mining Galleries where I have selections of pictures from some of the wonderful places I have been, all fascinating and inspiring and beautiful, and some terrifying!

I am happy to be associated with the International Society for Speleological Art   for whom I wrote an article about posing some years ago. This wonderful group of eccentrics are all people I am pleased to be able to call friends. We have a number of their artworks around the house and they are wonderful. They hold regular exhibitions of their art and in 2011 are presenting an exhibition in Buxton, Derbyshire 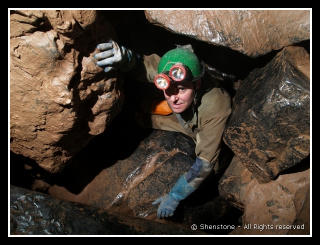 If you would like to know more about the caving camera equipment I use there is a section on the website which describes some of the equipment and tehniques used. If you want to learn a lot more about the way to do this then I recommend Images Below a book in which I am pleased to feature.

In fact I walked into an Australian capmsite an hours drive from the neares road to be met by the comment "Strewth it's that bloke in that pommie caving book I'm reading" and the reader promptly turned the book around to show his colleagues. The wonderful thing about caving is you travel half a world, meet a bunch of people like this and they invite you to go caving with them and show you truly wonderful places the next day
And finally if you'd like to understand more of the science of this world please take a look at the Cave Geology page on my website